On Both Black and White Photo by Paweł Czerwiński on Unsplash
This post is an adaptation/extension of the excellent post by Ben Szabo on dev.to.
If you want to know more about web accessibility I recommend you take a look at this excellent guide.
Do you want to know even more about color schemes and how to choose an aesthetic color palette in 2021? Check out this awesome blog post from Evinex.

I am considering the possibility of allowing the visitors of my website to choose whether they want a light or dark background. With a dark background (almost black) the text would become light (almost white), the opposite of what it is currently, but the accent color, this blue , would no longer have enough contrast on black.

What is contrast and how is it defined?

The relative brightness of any point in a colorspace, normalized to 0 for darkest black and 1 for lightest white.

In the case of the sRGB color space, the default used throughout the Web, there are some simple expressions to calculate this relative luminance, which depends on the coordinates of the color in question.

Black has a relative luminance equal to 0, while that of white is equal to 1, so the maximum possible contrast, $C_\text{max}$, is 1:

It is easy to see that the minimum contrast is equal to 1, since it is given when both colors have the same relative luminosity ($L1 = L2$).

The WCAG guidelines say that the minimum contrast ratio between a given text and its background should be at least 4.5:1.

Colorable is an excellent tool with which we can check the contrast of color combinations.

So, which colors look good on both black and white?

Given the relative luminance of a color, $L$, we can calculate its contrast on black, $C_\text{black}$, with the expression2:

Contrast on white, $C_\text{white}$, is calculated with the expression3:

If we want to choose a color that looks good on both black and white, we must impose that both contrasts, $C_\text{black}$ and $C_\text{white}$, are at least equal to 4.5. That gives us these two inequalities:

From the first one (black) we get:

whereas from the second one (white):

Ben Szabo has created this Pen which iterates through the RGB color space, with increments of 17 per channel4, listing 76 colors whose contrast on both black and white is at least 4.5.

See the Pen Colors With 4.5:1 Contrast on Black and White by Ben Szabo (@finnhvman) on CodePen.

What is the maximum contrast we can achieve on both black and white?

In order to have enough contrast on both black and white, the relative luminance of the color has to be between two values5, as you can see with the inequalities (1) and (2). The theoretical maximum contrast of a color on both black and white, $C_\text{b&w}^\text{max}$, can be obtained by imposing that those two values of relative luminance be equal:

A good combination of primary colors (red, green and blue) would be6:

But, what if we show all the available colors?

In his Pen, Ben Szabo iterates through the RGB color space, with increments of 17 per channel, warning us that, if we were to iterate through all possible colors (increments of 1), we would get ~300k colors. Obviously listing so many colors does not seem very practical, but visualizing them can be very interesting.

The following figure shows how many colors are available depending on the desired contrast:

We can see how for $C=1$ (the minimum possible contrast), all the colors in the RGB space are available, namely:

colors. As we increase the contrast, the number of colors decreases, plummeting from $C=4.5$, until we have only one color available in the limit $C_\text{b&w}^\text{max} = \sqrt{21}$, the fuchsia #cf0dcc.

The following animation shows all the colors available in the RGB space (a 256-sided cube) depending on the desired contrast (on both black and white): 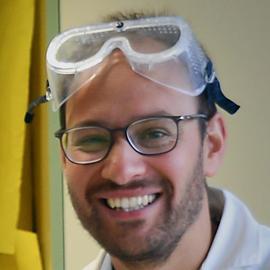